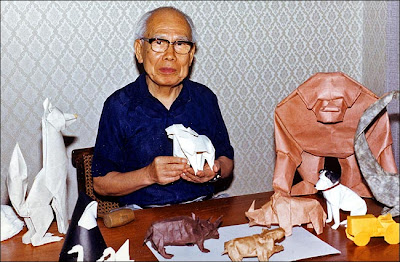 FOR more than half a century Akira Yoshizawa was the most famous origami artist in the world. He pioneered origami as a creative art and devised many new folding techniques. A symbolic notation system of his design is now used worldwide, allowing enthusiasts to fold his models from books, even if they do not understand Japanese. In 1963 The Origamian newspaper had already described him as “a legend in his own lifetime”, and his career achieved new heights in the following decades.

Akira Yoshizawa was born in 1911 into relatively humble circumstances in Tochigi prefecture not far from Tokyo. His father was a dairy farmer, and he had only six years’ schooling. At 13 he moved to Tokyo and worked in a factory making machine tools but continued his education at evening classes. He became a technical draftsman at the factory and taught geometry to apprentices. Being interested in origami he used paper folding as a teaching aid. His employers were so impressed that they allowed him to practice origami in work time. 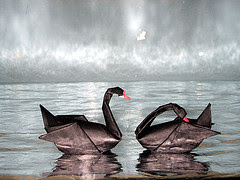 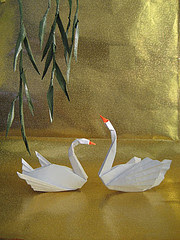 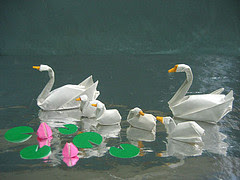 In 1937, aged 26, Yoshizawa left the factory to devote himself full-time to his boyhood hobby of origami. He eked out a living, doing part-time jobs when necessary, until the outbreak of war, when he joined the Japanese medical corps. He was posted as an orderly to a military hospital in Hong Kong, where he regularly decorated the beds of patients with colourful origami models. He later became ill himself and so returned to Japan. In 1944 some of his creations were used in a book, Origami Shuko, by Isao Honda.


His first recognition as an origami artist came in 1951 when Tadasu Iizawa, editor of the picture magazine Asahi Graph, wanted to illustrate a feature with origami zodiac symbols. He tracked down Yoshizawa, who was clad in an old army uniform, his only clothes, and working as a door-to-door salesman oftsukudani, fish delicacies. The story goes that the magazine bought him new clothes and put him up in a hotel. He then worked day and night to design the required zodiac models. The article, published in January 1952, caused a sensation and Yoshizawa became famous overnight. 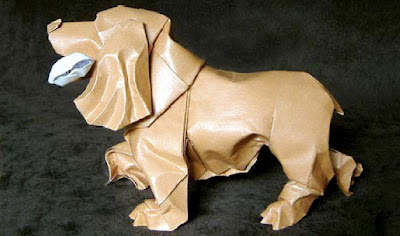 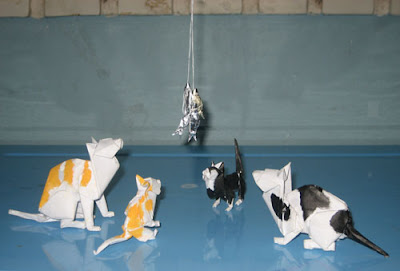 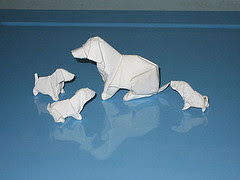 Iizawa helped to attract other commissions, and Yoshizawa’s first book, Atarashi Origami Geijutsu (New Origami Art) appeared in 1954. This was the first book to use his system of diagram notation which allowed non-Japanese readers to make the models. This notation, slightly modified by the US author Sam Randlett in the 1960s, is now used in origami books worldwide.

In 1954 Yoshizawa founded the International Origami Centre in Tokyo, which started to publish an origami magazine. Interest in his genius continued to grow, and in 1955 he had his first big exhibition, in Ginza, the Tokyo shopping area. In October of the same year he began to achieve international recognition when 300 of his models were shown at the Stedelijk Museum, Amsterdam. The exhibition attracted many visitors and was reported in the media across Europe and elsewhere. At the same time Westerners were showing a growing interest in paper folding — the word origami did not acquire wide currency outside Japan until the 1960s — thanks to the efforts of Robert Harbin, who presented an origami TV programme in Britain, and Lillian Oppenheimer, who founded the Origami Centre of New York. Harbin and Oppenheimer helped to promote Yoshizawa’s work. 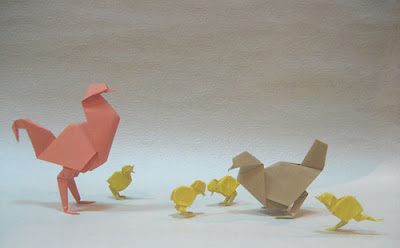 His classic Origami Dokuhon was published as a paperback in 1957. In 1959 Oppenheimer arranged an exhibition of Yoshizawa’s models in the Japan Centre in New York. It ended in disaster when several visitors — assuming that the models, being made only of paper, were worthless — picked up the exhibits as souvenirs. Before the organisers could intervene the exhibition had vanished. 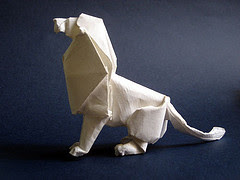 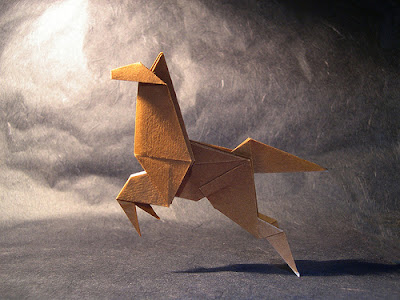 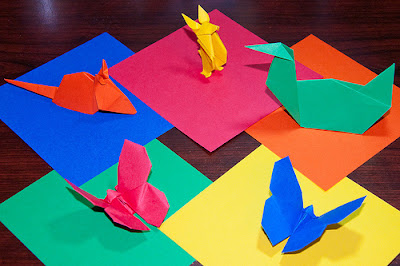 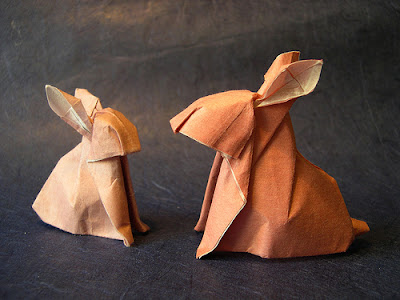 Yoshizawa’s growing international profile prompted the Japan Foundation to sponsor him as a cultural ambassador. In that role he travelled widely, teaching origami and promoting Japanese culture. He visited Britain three times; he was made a life vice-president of the British Origami Society and he appeared on Blue Peter in 1983. 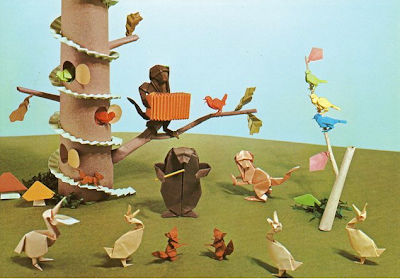 According to David Lister, an historian of origami, “Yoshizawa transformed the art of origami from a somewhat stilted paper craft which used extensive cutting to what is an art form in every sense.”
When Yoshizawa folded his models there was a special life in them which few other folders could reproduce. Yoshizawa always refused to sell his models — he said that he considered them to be his children. He wrote some 18 origami books, but only a few hundred of his designs were diagrammed — and in 1989 he estimated that he had created more than 50,000 models. 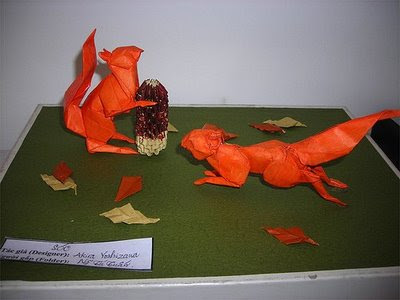 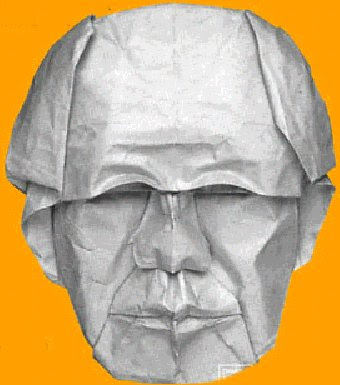 He will also be remembered for originating the sculptural technique of “wet folding”. This involves spraying water on to a thickish piece of paper which may then be moulded into three dimensions.
Before the war Yoshizawa studied for two years as a Buddhist priest, and though he did not enter a monastery, he remained a devout man. He would often pray before starting a folding session. 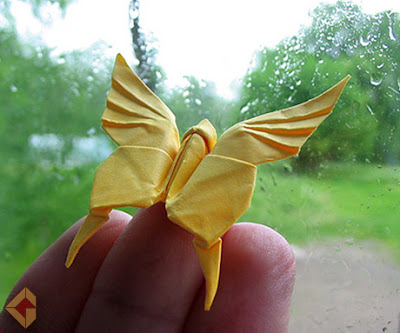 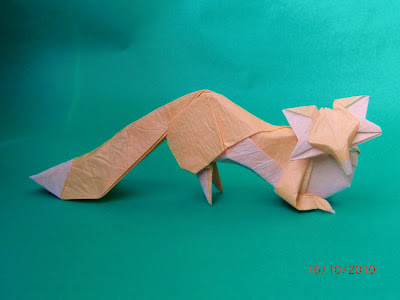 Amid the rivalry between Japanese origami groups, Yoshizawa was often accused of distancing himself from other folders, whom he in turn accused of stealing his designs. 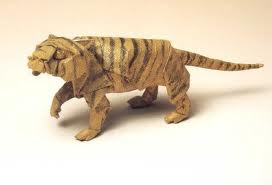 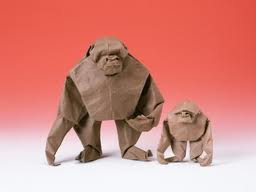 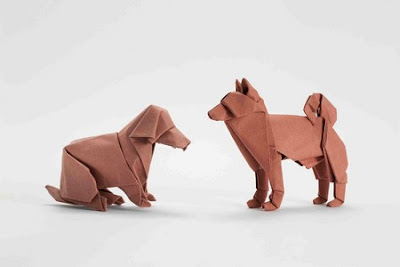 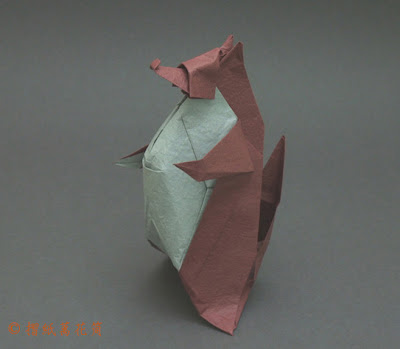 Westerners visiting him were careful not to mention other Japanese folders for fear of upsetting him. However, he mellowed in later years.

In March 1998 he was one of several exhibitors at the Louvre in Paris for what was probably the greatest origami exhibition ever seen, and he was happy to pose for photographs with a rival folder, Yoshide Momotani.


Yoshizawa received many awards for his origami. In 1963 his bookTanoshi Origami (Joyful Origami) was awarded the Mainichi Culture award. In 1971 he received the Mobil Children’s Culture Award, and in 1983 the Japanese Emperor awarded him the Order of the Rising Sun. 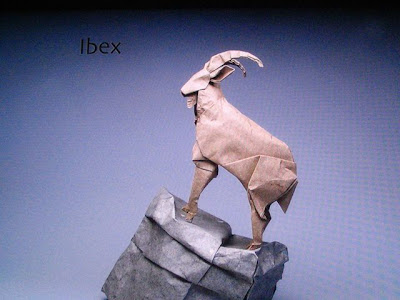 Posted by Origami Maniacs at 8:54 PM