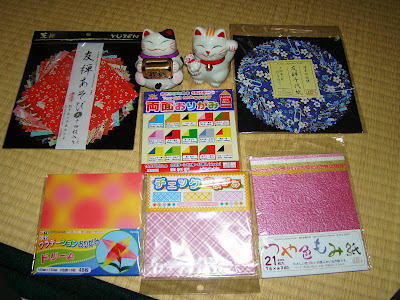 Hello my dear Origami Maniacs! As you know, we had an origami paper giveaway on May. The winner was Gabriela Patane from Italy. I thought about having the next giveaway on December. Nevertheless, Origami Maniacs is going to celebrate its first anniversary next August 30th. I want to thank to all the people who follow my blog, follow my facebook page, and watch and support my videos. for that reason I decided to have the Origami Paper Giveaway on the day of the anniversary.
This time, I will have two winners.......one is going to be chosen by the number of likes in Origami Maniacs Facebook, and the other s going to be chosen by me according to his/her creativity and love for origami.
The prizes for this giveaway will be:
1. Six packs of original Japanese origami paper and a cute maneki neko or lucky cat. If the winner doesn't want the maneki neko, he/she can get a puncher with the shape of the sakura flower. 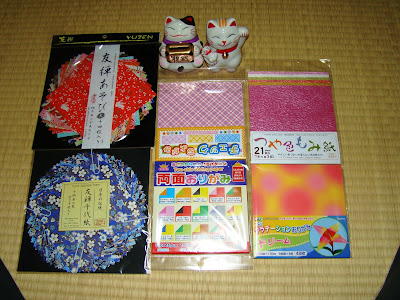 Here you have  the bases for participating in the origami paper giveaway:


2. Visit my youtube channelo, subscribe to the channel  (http://www.youtube.com/user/origamimaniacclub?feature=mhee) and choose what you will fold from the videos I have made. You cannot submit any origami model. It has to be one or more models from my videos.


3. After you choose the video, post a comment on the video telling that is the model you will fold, and give it a like. Then fold what you choose, and send me the picture of you and what you fold. You can make cards or use your imagination with the creations in the videos. If you are shy, and don't want to appear in the picture, then send just the model you folded to origamimaniacs@gmail.com.


4. The mail's subject has to be enter me. So don't forget it please. In the mail attach the picture or pictures, and tell me why you chose that figure to fold, include your name, age and the city and country where you live.


4. I will be receiving the pictures from today until  July 30th. On August 1st, I will publish the album in facebook, and you can give the link to your family and friends to support you and help you with their likes.